Istiqlal, the national mosque of Indonesia in the capital city, Jakarta, is recognized as the largest mosque in Southeast Asia. Built to commemorate Indonesia’s Independence the mosque was named “Istiqlal”, the Arabic word for Independence.

This mosque is easy to reach as it is not far from the Merdeka Square and stands almost opposite to the Jakarta Cathedral. Many foreign dignitaries have admired the Istiqlal, including Bill Clinton, Prince Charles, Barack Obama, and King Salman of Saudi Arabia, also because its location emphasizes Indonesia’s tolerant philosophy and way of life among diverse religions.

This mosque became the talk of the town immediately after it was officiated in 2006. People were astonished by its gold-plated dome that glistens in the sun. Located on the outskirts of Jakarta, the golden domed mosque is open daily for prayers, except on Thursdays when regular maintenance works are done.

The mosque was named “Soko Tunggal” (one pillar) as it only uses one main pillar to support its roof. Combined with four smaller pillars, they represent the five principles of Pancasila, the essential philosophy on which the Indonesian state is built. Another trivia info: the mosque was built without nails. You can easily reach this mosque located by the Tamansari water palace in Yogyakarta.

Some people say this is the most majestic mosque in Indonesia. The mosque at Indramayu has seven floors while the top floor alone can accommodate up to 4,000 persons. It has a total height of around 73 m and is located at the Al Zaytun School Compound, in the city of Indramayu, West Java. The Grand mosque at Demak in Central Java, this beautiful 15th century mosque is one of the oldest in Indonesia, which has a fusion of Javanese Hindu and Islamic architectural styles. It is believed to have been built by Sunan Kalijaga, one of the venerated Nine Muslim Saints in Java (the Wali Songo), during the time when Sunan Kalijaga taught and spread Islam on Java. The structure is built from timber and has beautiful intricate carvings. 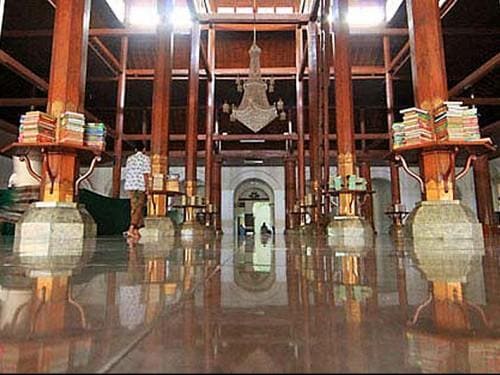 As the oldest mosque in East Java, the Sunan Ampel mosque is currently one of the religious attractions in the city of Surabaya. It is surrounded by buildings in Chinese and Arabic architectural style. On the left side of the mosque is a well that is believed to be an auspicious well, typically used by those who believe that its water will strengthen their pledge or oath. The mosque is 2 km away from Jembatan Merah or the Red Bridge of Surabaya. This mosque is by far one of the best mosques with Chinese-Muslim influence in Indonesia. It has a blend of Arabic, Javanese and Chinese cultural styles. Visiting the Muhammad Cheng Ho mosque will give you a religious and diverse historical cultural experience all at once. The mosque is quite easy to find since it is located on the side of the main highway at the fork towards Pasuruan, Malangand Surabaya, about 300 meters from the Pandaan bus terminal. The first thing you may notice about this award-winning building is that this mosque has no dome. But people have no difficulty identifying it as a place of worship thanks to the embedded calligraphy written on the wall. The walls were constructed using stacked stones to withstand tectonic tremors. With a capacity to accommodate approximately 1,000 worshippers, the mosque was designed to “blend in” with nature. The stacked stones allow for natural air flow, eliminating the need for special air conditioning. It is located in the center of Bandung, so you can not miss it. 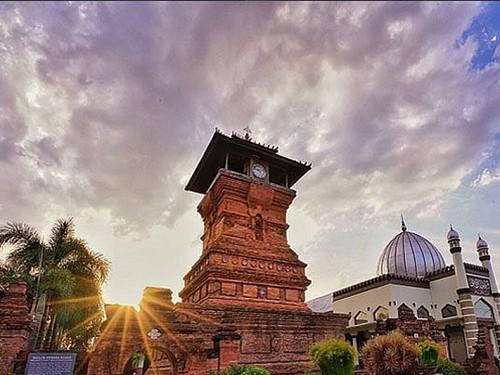 The Menara Kudus Mosque (also known as: the Al-Aqsha Mosque) is also one of the oldest mosques in Indonesia built around 1549. Located in the Central Java town of Kudus, the mosque is popular as a pilgrimage site in Central Java. This mosque has an ancient Hindu-Buddhist architecture as shown from the minaret that was built from red bricks with 15th century decorated Vietnamese ceramics ornaments. As it rises above the sea at the southern end of Losari Esplanade this elegant twin-domed structure is known as the “floating mosque”. Constructed using concrete piles driven into the seabed, the Amirul Mukminin mosque resembles the traditional Makassar and Bugis stilt houses. At high tide, the mosque looks as if it’s floating. For travellers, best time to visit the mosque is at sunrise or sunset. It has three floors that can accommodate up to 400 worshippers.